Sitting in your home trying to relax, the anticipated peace regularly gets disrupted by busy roads, construction and nearby crowds of people.

Capitalizing on the same technology that has enabled travelers to tune out the buzz of racing airline engines, researchers at the Nanyang Technological University in Singapore have developed a device that can reduce noise pollution – even while windows are wide open.

Designed to be mounted onto window grilles, the device – though still a prototype – could reduce up to 50 percent of noise coming from nearby environments. It uses “active noise control” technology found in many high-end headphones that cancel external noise and adapts it to work in a large, open area.

The benefits, researchers say, are two-fold:

Though the windows follow the same premise as noise-canceling headphones, expanding the capability to encompass a home proved particularly challenging.

“We needed to control the noise in a large open area, instead of just around the ear,” said Professor Gan Woon Seng, director for NTU’s Centre for Infocomm Technology (INFINITUS), who led the research.

The research is part of efforts by the university to develop solutions for sustainable living.

A special sound-emitting mechanism, equipped with a microphone and working like a speaker, is hooked up to a processing unit. It can detect noise before it reaches the window.

The mechanism quickly emits a countering sound that has the same waveform characteristics of the invading noise. When both outside noise and anti-noise converge, they cancel out each other.

Researchers tested the windows in a soundproof chamber that resembling a typical room in a home. Recorded sounds from construction sites, jet engines and trains were used during the tests.

The school is working to make the technology more efficient, smaller and cost-effective to produce.

There is no timeline as to when the windows could be available for widespread use. The researchers are working with the Singapore government to make them viable for residential and commercial applications. 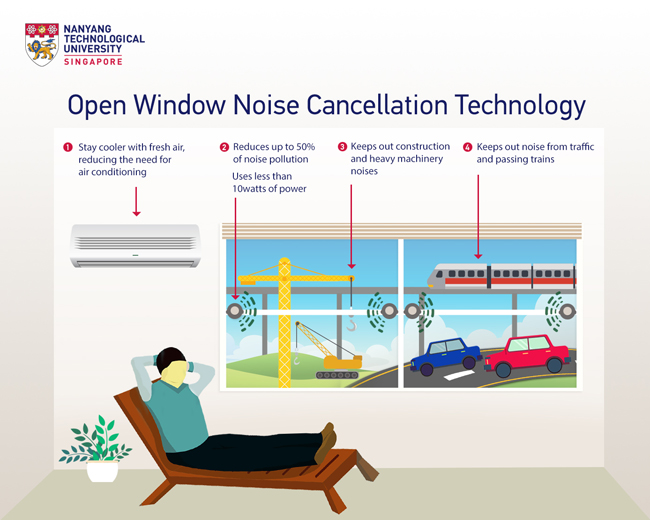